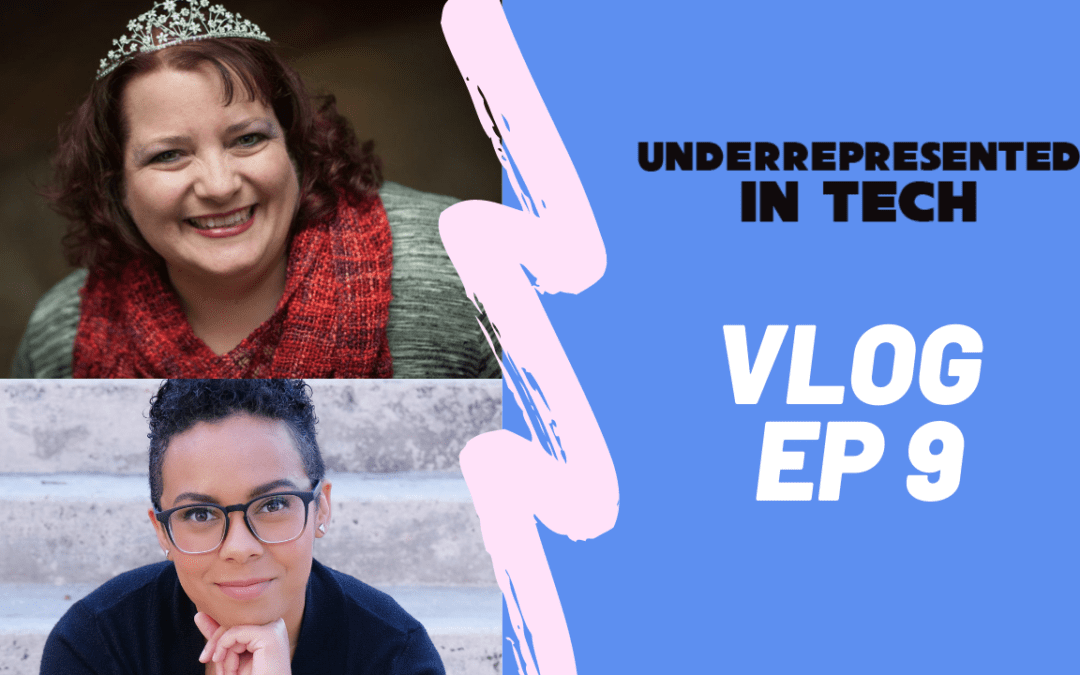 Welcome to the Underrepresented in Tech Vlog!

Today I wanted to talk to you a little bit about two things that we do kind of often. Not only professionally, but personally:

Allie: It’s something I’ve been thinking about a lot. And so first I kind of want to – just for people who are listening – explain what those two things mean. So when you’re calling someone out you are maybe not admonishing them all the time. Sometimes it might be an admonishment, but you are making them aware in usually a public setting that something that they did was anywhere from inappropriate or insensitive to all out racist, sexist, ableist, whatever. You’re saying, “Hey, what you just said was wrong, aas mean was unkind, was, you know, all these other things.”

Calling them in is like a softer way to do that. It’s maybe doing it in private, doing it through a text message or a DM, or pulling them to the side and trying to explain to them what they did was wrong. And it can be really difficult to know when it is appropriate to do either one of those things.

When do you use which?

It’s almost a little heartless to say, “Oh, you’re making an example out of somebody.” But sometimes it’s a good example to see.

Whereas calling somebody in it’s a little bit safer Maybe it won’t be damaging to their reputation or it won’t embarrass them.

And I think a lot of people, these days are having a hard time with the idea of, “Oh, well this person said something racist and I don’t want to embarrass them.” So I’m going to call them in. As a black woman, I’m not really concerned with saving a racist the embarrassment of being called a racist in public.

But sometimes somebody says something maybe just out of ignorance or they just weren’t thinking. Calling them out might be an over reaction to that instance. So it can be really tricky to know when to do which.

Michelle, what’s your experience? What do you think about, about these two ideas? How do you usually handle stuff like this?

Michelle’s thoughts on calling people in vs. calling them out

Michelle So I’m one of the least confrontational people. I avoided confrontation in my life as much as possible. And I think that’s part of my upbringing, you know, parents that fought constantly and things like that. And the oldest sibling trying to always make sure everybody’s happy that the status quo kind of thing.

It takes a lot to move me to even address people about issues. When it comes to something that I feel like is an aggression against me, micro or otherwise. For me, I swallow way more hurt and anxiety and things like that than I probably should.

I’m going to guess that’s not really healthy for me. I guess in the past I’ve been able to call out brands or politicians.

Michelle: Yeah, for sure. It’s not a personal thing. It’s not against me. I’m not going to call up the president of the United States. Person to person, I am one of those people that is just very much trying just to keep people happy and kind of hang back a little bit and say things after I feel like I’ve processed.

So, I never like just – boom – react immediately and do anything because it’s just not me to do that. I I’ll talk to a friend or I’ll let things fester. I’ll think things through before I make a decision of whether or not to say something publicly or even to call somebody in and have a conversation with them that way.

Unless you know its raising my daughter or a close friend, I really don’t have a problem telling somebody they hurt my feelings that way, It’s just who we are, how the situation we were raised in, the age that I grew up in versus the age that you grew up in, like all of those different things.

Harmful tropes around people who speak up

And that those kinds of tropes actually have roots in misogyny and supremacy and in racism because it tries to downplay an entire group of people’s honest reactions to things. So if Allie Nimmons as a black woman is upset about some racist person, people will have a tendency to say something like, well, she’s just an angry black woman.

Why do you think she’s an angry black woman? Perhaps her experiences and those of generations that came before her have reason to be angry.

Or I start to say something about like… Maybe accessibility. That there’s a ramp into a building and then stairs. Great, good. I could get in the door, but I can’t get anywhere else and I’d get angry about it.

I get called a crazy white woman or an angry white woman. It’s like, okay, you can call me whatever you want. It doesn’t change the fact that you still have an accessible situation. But instead of taking responsibility, you’ve now shifted that back on the person who has a legitimate issue. So anyway, that’s the stuff I was thinking about when we were thinking about this topic.

Allie: No, that’s, that’s amazing. And language is so, so important to those situations. And yeah, I’ve never been called a crazy or an angry black woman to my face, but I’m sure there are people who think that of me. And yeah, I like what you said about. Like your upbringing and your past kind of influencing those things.

The benefits of making people uncomfortable

Allie: Like I grew up extremely non-confrontational. I was a very shy, painfully shy child. I think as I’ve gotten older, I’ve kind of found my voice and my confidence a little bit more. And I’ve realized that if I do speak up about something, the worst that will happen is someone will get upset with me or maybe what I was talking about was wrong and I’ll have to apologize. There are way worse things in the world than that.

Michelle: Yeah. Yeah. Right. Like, I think it’s important every once in a while to make people uncomfortable and put them in the hot seat so that they will understand maybe the severity of what they’ve done.

Allie: Like I want anyone listening who wants to be an ally to know if you are a non-confrontational person, if that isn’t something that you’re prepared to do for personal reasons or professional reasons, as far as calling someone out publicly, calling them in as a very good alternative, pretty much almost all of the time.

Allie: To reach out to somebody that you know and say, “Hey – that wasn’t cool, what you said, and here’s why.” That can always be done in a private setting. And it’s a lot more comfortable for everybody involved.

And I think also there’s a whisper network or something like that. And I’ve heard people describe that, particularly in WordPress, that there’s like a whisper network where people are talking in DMS and talking to each other individually, and so more people don’t know more things. That can be a problem as well. But I think that overall, it helps to make small changes with people and it helps to hold people accountable.

You don’t have to do either

Michelle: And I add too that you can be an ally and still not be comfortable with either one of those things based on your own previous experiences. So if I’m an ally and I don’t want to call somebody out publicly, and I don’t want to call them in because I had experiences where I’ve been physically assaulted in the past, or I fear for my, my own personal safety or my job or something like that.

Even though it feels bad, not to sometimes do it is okay for your own personal protection and your own, you know, sanity and whatever else. To say I’m going to take a pass today. And today I’m not okay to be able to do that.

Allie: And I should say too, we like framing everything in the context of work and professional life and WordPress, because that’s a lot of people who are listening and the context in which people know us. But this is something that – if and when you are comfortable – you can do in all facets of your life and should do.

Or in your personal life. This is not as frequent now, but you know, say you’re at a dinner with a group of friends and somebody says something that’s not okay. Depending on the environment or the friend group or whatever you can choose to say, “Hey, that’s actually not cool to say and here’s why.”

Or you can text them later, pull them aside afterwards and say, I don’t really don’t like that. Let’s have a conversation. It doesn’t always need to be, Oh my gosh, you’re a racist! You can have these conversations in a very gentle way because a lot of times it’s like, you don’t want to completely humiliate the person. You want to educate them.

When calling out may be preferable for some

Allie: I think the times that I call people out is when I know they know what they said wasn’t okay. And so I’m not going to bend back backwards to protect their feelings.

Michelle: Yeah. I had a conversation with somebody last month who, who honestly didn’t understand why people have the chosen pronouns that they do and that if you’re born assigned one sex that you can choose to have other pronouns, because that’s how you identify. So I had a long conversation with this person explaining at the end, they simply didn’t understand. Why somebody who has got male anatomy thinks that they’re a woman. I said, well, because they are, but that’s another point. I get that – You’re older and this is boggling, but they agreed that this person should be called what they want to be called and how they feel.

And so we talked about the difference between sex and gender and things like that. And I did my best. At the end they realized they don’t want to hurt people’s feelings. And that they don’t have to understand it to respect somebody. And I know you can’t ask for better than that sometimes, right?